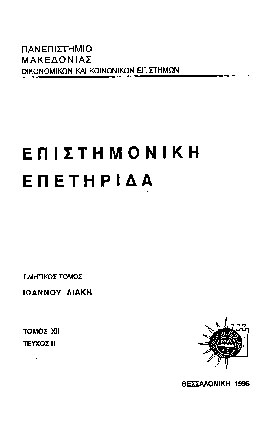 The Greek economy is subject to a level of public revenue whose share in the country's GDP ranks among the lowest in the EEC, as well as to an extremely high tax burden on wage earners as a share in total direct taxation. Due to this is the emergence of large public deficits and the inability to cope with them. The long term inefficiency of the income tax in Greece, due to its specific structural particularities, seems to point in favor of adopting a system of direct consumption taxation combined with a higher taxation of luxury goods and services as well as with taxation of capital. The shift of Greece, from the income tax to the direct consumption tax promises its convergence to the average Community level, in terms of fiscal discipline, as well as, more importantly, in economic terms, with afar higher degree of success in comparison to the actual prevailing tax system. This achievement will result through the elimination of tax evasion, the suppression of the hidden economy and the controlling of macroeconomic disequilibria.